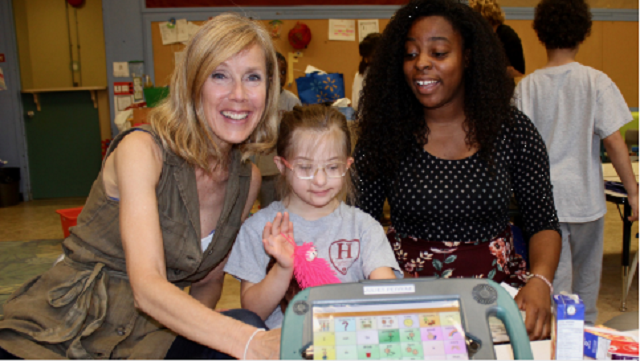 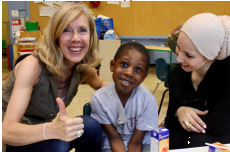 The school’s Early Stimulation Class (ESC) team used TouchChat, an AAC software, with three Cycle 1 students who had varying diagnoses and communication needs, and each thrived in their own way.

TouchChat HD, a communication software that works with Apple products, is designed for individuals who have difficulty using their natural voice. After training from English Montreal School Board (EMSB) assistive technology consultant Andrea Prupas, the Hampstead team was anxious to try it out.

Student Lashawndel was non-verbal at the beginning of the 2018-19 school year. When he transitioned from a vocabulary board to TouchChat, he started having verbal approximations. For example, if he wanted apple juice, he would touch the matching visual on his iPad, hear the words “apple juice” and repeat them. “He can now say numbers, sing with us, express his wants and needs,” said Razan Khobieh, speech-language pathologist at the EMSB. “It’s absolutely amazing the progress he has made.” The ESC team noted that Lashawndel was more patient and confident in the classroom.

Lashawndel’s parents first witnessed him communicating with the iPad at a parentteacher interview and were enthused. “Lots of parents are afraid of using an iPad or visuals because they worry their child won’t talk. But it’s multi-modal. They see the picture of the word, they hear it and then they say it,” Khobieh explained.

Lashawndel’s father Linton Myers watched as his son continued to use the iPad over the summer. With a strong memory and a love for numbers, this student took to technology early, having used a phone at the age of two. “I’m feeling great about how Lashawndal has taken to assistive technololgy in the classroom and at home. He understands it well. The iPad helps him to make sentences. It is changing the way he’s learning, and he is more independent,” shared Myers.

Tyler talks, loves to spell and is hyperlexic (when a child has the ability to read early on) but his speech was not functional. The team customized TouchChat on his iPad with a strengths-based approach by adding word prediction as an option when using text-based communication. This helped him express himself more clearly. His classroom teacher at the time, Margot Faessler, explained that they were able to get into his world to work with him quicker. “He was less frustrated and experienced less behavioural issues and stimming.”

Faessler’s other student Juliet has language ability, but due to a speech disorder, often seen in individuals with Down syndrome, her speech is unintelligible. “Our goal with Juliet was to have her communicate through the iPad in a clear fashion. Juliet presses her message window to say how she is feeling, either sad, mad, etc. This helps us, and her friends can now understand her,” said Faessler.

While the team found TouchChat easy to learn, the challenge comes later while tailoring it to each student’s needs as they grow with it into adulthood. “Parents need to be trained as well so they can continue the work after school. To reap the most benefits, AAC communication tools need to be used every day since communication is 24 hours a day, seven days a week,” said Prupas.

“TouchChat has allowed our students to find their voice whether it speaks for them totally or supports their voice,” added Faessler. “Over the school year, the goals for the students changed. At the beginning, they pointed to things to communicate, not being able to verbalize their thoughts. At the end of the year they were using sentences.”

Aug 31, 2022
On behalf of the Directorate
All EMSB school personnel have been eagerly awaiting the...
Read More

Mar 17, 2020
Educational Resources for Learning at Home
During this time of school closures, don’t forget that the...
Read More