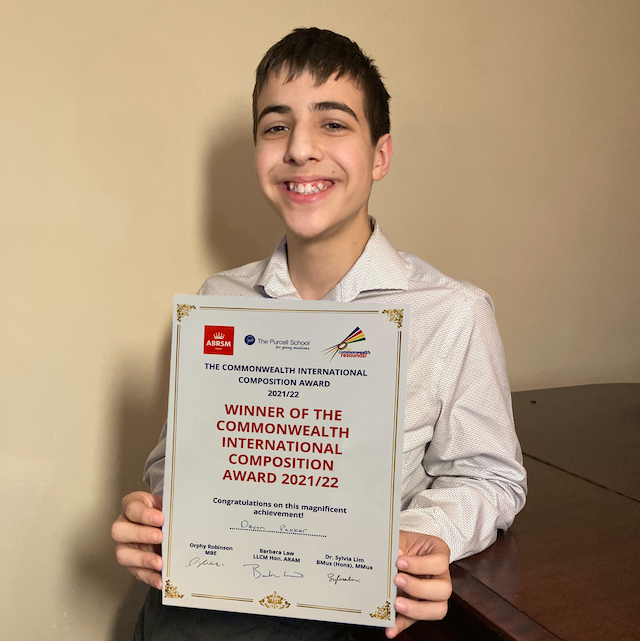 Devon Packer, a Secondary V student at Royal Vale School in NDG, has won the grand prize at this year's Commonwealth International Composition Award (CICA). He was chosen by the organization, Commonwealth Resounds, which has as its mission to connect musical cultures and to promote initiatives and partnerships in Commonwealth countries.

The 16 year old pianist has been at Royal Vale since Kindergarten and began studying piano at the McGill Conservatory of Music at the age of five. His first major performance was at the age of seven, when he debuted as a soloist with the Orchestra symphonique de l’Isle, playing Haydn’s “Divertimento in C Major.” He has appeared at multiple venues in Canada, Europe, and the United States, including New York’s prestigious Carnegie Hall.

Devon is also an accomplished arranger and composer. He had his first composition, “The Fantastical World of Camelot,” published in 2015 when he was 10 years old. Since then, he has participated in the Purcell School’s Online Composition Academy, which offers training to young people all over the world. He has written for numerous ensembles, including the Dionysus Ensemble. In 2021 alone, he was shortlisted for two international composition competitions, being the only finalist to represent Canada in both. In May 2021, he won the Young Adjudicator’s Award in the Commonwealth International Composition Award for his composition “Oceania.” Also, in 2021, he received a special commendation in the CICA Grand Final.

“This award means the world to me!” says Devon. “It is a tremendous honour and a great validation of all the hard work that I have put into developing my own compositional voice.”

What are his plans for the future? “I plan to keep composing!” he says. “If any more opportunities arise out of this wonderful competition, I will embrace them wholeheartedly and dive straight in. There are definitely a number of things I want to explore over the coming summer, like different instrumentations and compositional forms. I also want to work on my idiomatic writing; that is, writing pieces that play well on the instruments I write them for. Aside from that, I’ll keep pursuing my piano studies, as well exploring the world of percussion.”

In terms of how the composition of music has been such an important part of his life, Devon notes: “I’ve been composing casually for around six years. I remember

one of the first pieces I wrote came from improvizations on the piano, and I just had to write it down! Ever since then, I’ve refined my craft, from improvizations to fully planned out theme development. Until recently, I was focusing mostly on piano, but I really got a chance to develop my compositional skills when quarantine started, causing live performances to be cancelled. It allowed me to focus on the world of composition, since composition is an art that can be practiced in isolation.”

Devon will now prepare to perform one of his works for the Grande première des futures étoiles (Grand Premiere of Future Stars), taking place this June at Place des Arts. “I will be on piano,” he explained, “accompanying a professional soprano, performing ‘The Dragon-Fly,’ based on a poem by Edna St. Vincent Millay. I am super excited for this amazing opportunity to showcase my compositions to a live audience for the first time in two years!”

You can listen to his winning composition here: https://www.commonwealthresounds.com/news/winner-of-the-cica-announced.

About the English Montreal School Board

With a youth and adult sector population of more than 35,000 students, the English Montreal School Board (EMSB) is the largest English public school board in Quebec. Established on July 1, 1998, when the province created new boards along linguistic lines, the EMSB network consists of 77 schools and centres. For more details, visit the EMSB website at www.emsb.qc.ca.

Please listen to our podcast with Devon Packer